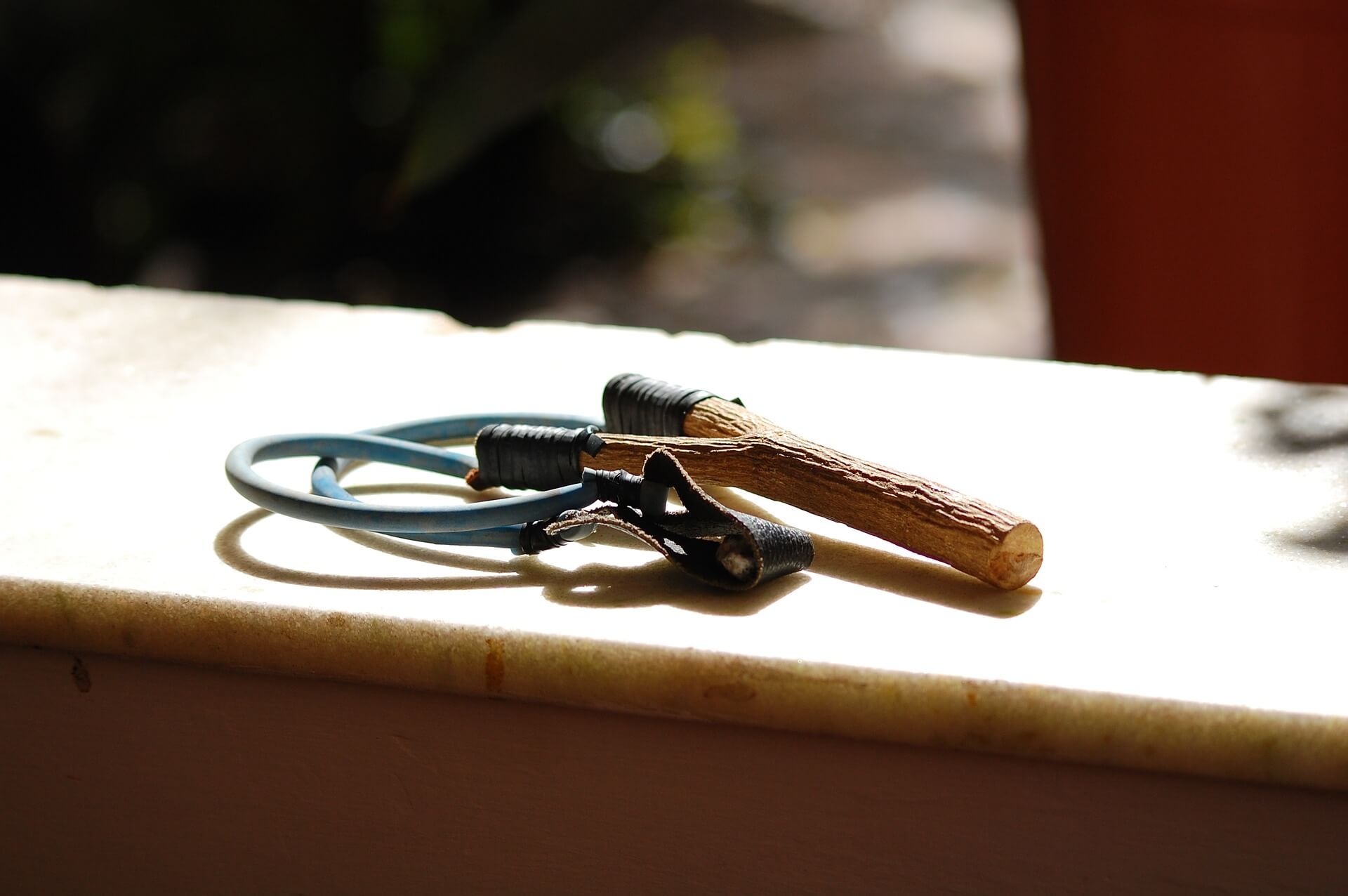 Steve Jobs is famous for telling us that we ‘can’t connect the dots going forward’. The Co-Founder of Apple was dropping out of college but took a course in calligraphy when exploring things.

He later reflected how valuable that class was in shaping the creative fonts that would go on to distinguish Apple’s typefaces going forward. The funny thing is, no entrepreneurship or business course will ever teach or emphasise the importance of calligraphy.

When Jobs was later ousted from Apple, he went on to create another incredible company – Pixar, which was responsible for timeless classic films like Toy Story (1995).

History is littered with examples like Jobs, big and small, who found something wonderful after the worst-case scenario… after ‘failure’.

Welcome to the Slingshot Principle

In the famous Bible story, David, a small boy, defeats the giant Goliath. This archetypal story has dominated popular culture for millennia… it is the tale of ‘the underdog’.

David’s tool was the slingshot.

The slingshot only gets its energy from the pull-back. So often in life we notice that we’ve been pulled back – but we don’t realise that this pull-back is just preparation for a powerful shot.

A Hollywood film was made about the story of Michael Edwards in 2016 – Eddie the Eagle. Edwards became the first person to represent Great Britain in ski jumping in the Winter Olympics for sixty years.

But Edwards wasn’t trying to be a ski jumper… not initially. First, he failed to get into the Olympics as a downhill skier. It was only after this rejection that he decided not to give up, and look for an alternative event.

So “Eddie” found a less competitive category, the ski jump, and managed to find his way into the Winter Olympics by qualifying for this.

At the 1988 Winter Olympics in Calgary, he came dead last in the 70 metre and 90 metre events. But that was not last in his books, which reminds us of the importance of winning our own race, and playing our own games more than the games of others.

Affectionately immortalised as “Eddie the Eagle”, he will be remembered far longer than those who actually stood on the podium in 1988.

There is an outcome worse than coming last – not being in the race at all.

What would have happened if Eddie had given up after being rejected from downhill skiing? This is an important lesson for us all on how costly it can be to fail to execute the Slingshot Principle.

If you do not apply the Slingshot, the penalty is not coming second instead of first. It’s not coming third instead of second, nor still last instead of the podium. As the Edwards’ story teaches us, there is an outcome far worse than coming last.

Not being in the race at all. 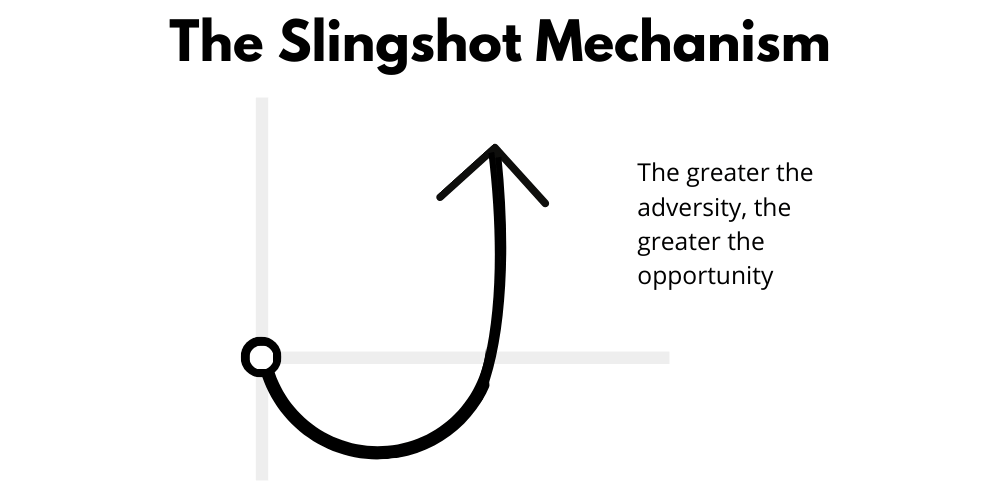 But failing to Slingshot sends you into a very different territory. This is why this Principle, which is all about resilience and open-mindedness, is vital to life. Slingshot failure is the only truly tragic and final form of failure – and it is not an option. 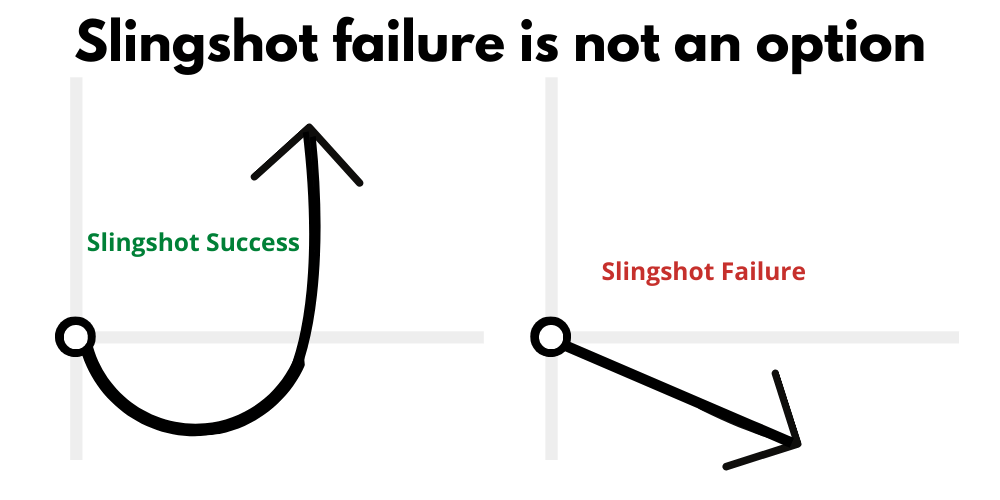 Understanding WHY – The principle of PAIN as the ultimate learning tool.

Being able to see the new best-case scenario is, I’m sure, a function of our creativity and resilience.

‘Eddie the Eagle’ would not have found his journey if he had been successful with his initial goal of becoming a downhill skier.

The Pursuit of Happyness is a 2006 film starring Will Smith, based on the incredible story of Chris Gardner, who went from homelessness to creating his own million-dollar brokerage. However Gardner’s story wouldn’t be so prolific and meaningful if he hadn’t endured homelessness.

As a result though, his story has inspired people all over the world. No one is going to opt-in to the sort of pain that comes from homelessness, struggling to provide for their children just to make their story more inspirational.

If I did that, they’d lock me up in a mental asylum!

Pain and failure are our greatest teachers

Partly because no one willingly opts-in to them, so if you are fortunate enough to cross their path, you are accessing learning that no one else will willingly embrace.

In the example of Gardner, being homeless didn’t create a Slingshot opportunity because it made his story more powerful. There can be little doubt that it fuelled his hunger and drive, giving him the power to make a contribution.

If he’d been in circumstances of comfort in a cushy job, would he have pushed so hard to create a more aligned life?

Nelson Mandela spent 28.4% of his life behind bars.

This seems pretty tragic – that almost a third of his life was spent behind bars. But Mandela is an example of someone who has used the Slingshot Principle to benefit the lives of others. This adversity, this worst-case scenario, made his story and incredible lessons of freedom what they are today.

Without his imprisonment, would he be as historical a figure? The same can be said of martyrs for causes who died young, like John F Kennedy, Martin Luthor King, Joan-of-Arc and Oscar Romero.

The Slingshot is always there if you consider the impact you can have on the lives of others. In truth, these Slingshots are the most powerful. The further you are drawn back, the more powerful your shot can be.

The Slingshot Principle in my life

In 1912, a group of young Lebanese men were meant to board a ship to take them to America. They were probably pursuing opportunity, dreams stowed in whatever small pockets they had. However, one of their group became quite unwell, so the group decided to stay behind and pass up their journey.

In the early morning hours of 15th April, 1912, that ship sank in the North Atlantic Ocean after having collided with an iceberg. It was called the RMS Titanic.

One of the men who was meant to board that boat was my great-great-grandfather.

And the world was separated into those who had a Slingshot Mechanism and those who did not. There is always a reason to complain and give up if you’re motivated to find one – COVID-19 was the best of all-time as it affected everyone.

But COVID-19 changed my life for the better, and to this day is possibly the greatest single event for my personal life. I started opening up to new projects, got together this website and blog, and began the launch of Doohat Labs, my most exciting project to date.

Despite a year of lockdowns and distancing, I met more aligned people than I’d ever met before.

If a pandemic can’t get me to falter, but only compounds my returns in life, I fear that I am largely impregnable to whatever adversity comes my way in the future.

With a Slingshot firmly placed in your pocket, you’re not scared when you see Goliath walking towards you. You’re excited.

Know someone who needs to Slingshot? Don’t forget to share this with them and help ‘open a door’.

Remember, the best way to open a thousand doors for you is to open doors for others.