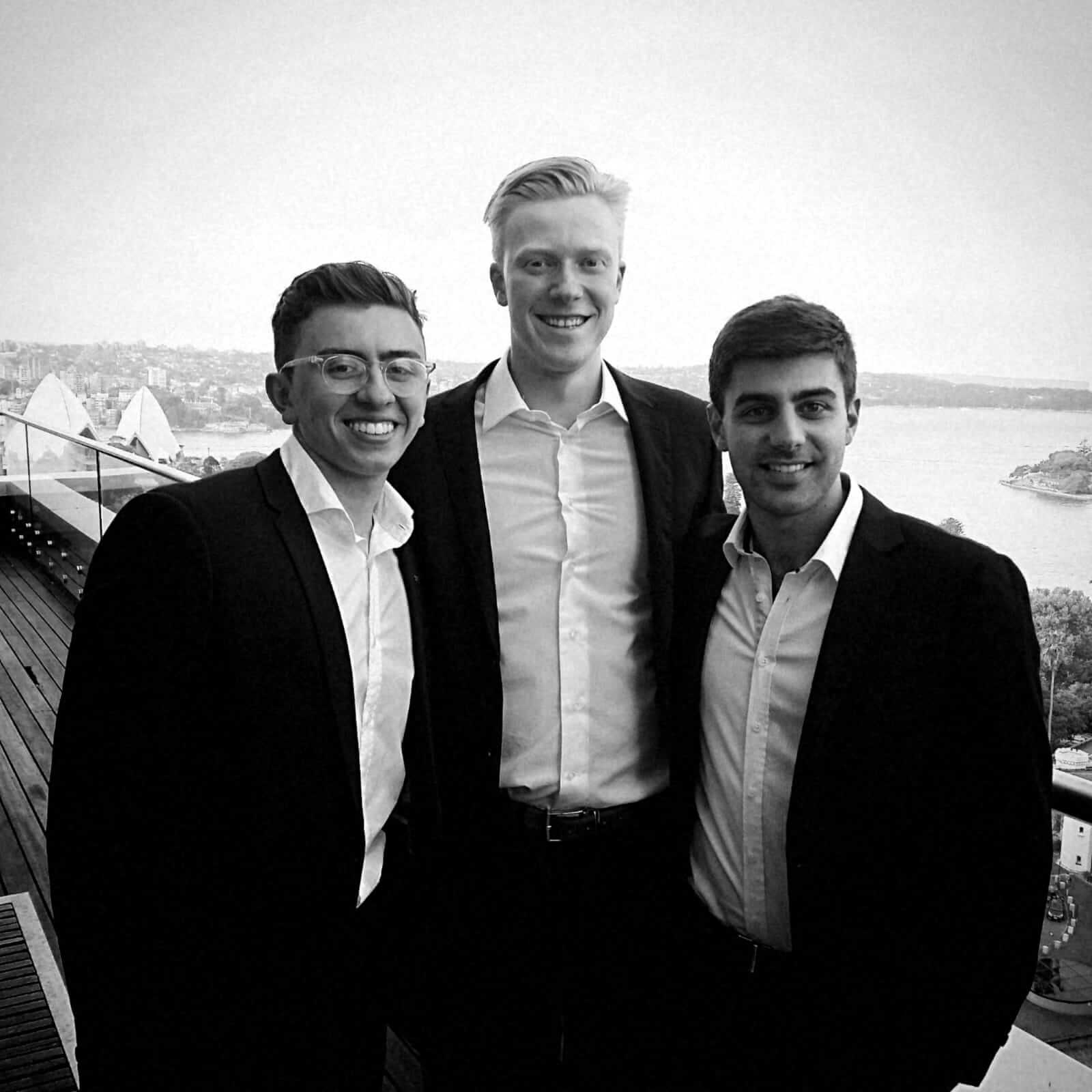 This is Warren Buffett and Charles T. Munger. 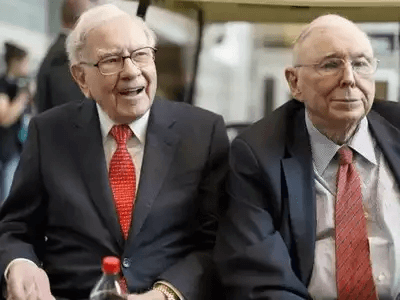 If you’ve never seen or heard of them before, they’re two of the most famous investors of all time, and their partnership has lasted 62 years. They were introduced at a dinner party by a mutual friend who thought they’d get along in 1959.

They form one of the most powerful partnerships of all time, and they show us the importance and impact that the right people can have on your life.

I can’t really comment on the impact Buffett has had on Munger, or vice versa. I’m not privy to their inner circles. And so, I decided to take today to comment in a way I can, which is by reflecting on the impact of my own version.

This photo was taken in 2018 at a fundraising event for our old nonprofit, From the Ground Up, that I was a co-director of alongside these two great friends — Scott McKeon and Nick Abraham.

Whilst Scott and I were high school friends, we were certainly not as close during high school as we were at the time of this photo (or in the years after). Our paths became more intertwined when he saw me get involved in this Nepal project, and decided to be a fly on the wall.

The project in Nepal involved community development work, which started out with the traditional charitable stuff; schools, health facilities, homes and the like. Then, after paying close attention to the work Nick led in Nepal, we found that running businesses in the community was likely to be more impactful and more befitting our scope.

He would send me a ton of Stanford-based podcasts, and these were amongst the first podcasts I ever listened to. I can’t overstate the significance of this — Scott was, is, and will always be the sort of friend who introduces you to new ideas.

Amongst the many podcasts and books he’s introduced me to are The 4-Hour Work Week by Tim Ferriss and Awareness by Anthony De Mello.

When I was slaving away in my real estate business, thinking I was ‘setting myself up’ for the future, 4 Hour Work Week radically changed and upgraded my thinking. The core premise of this book was that waiting to live for the future or work solely towards the goal of retirement was sheer nonsense. The idea of The 4 Hour Work Week was that rather than earning millions, you just needed to earn enough in the modern, opportunity-rich digital world to free up your time so you could invest it in the best areas for you.

For example, maybe the perfect job for you doesn’t exist in the world? Maybe your passion is sport, travel or dancing, and you can’t monetise those easily. So instead of ‘setting yourself up for the future’ of doing these things, this book was all about re-arranging your life now to put less time into paying your bills so you could do those things now.

In other words I realised that business could (and should) balance supporting a good lifestyle now whilst also optimising my future.

At a much later stage in my life, De Mello’s Awareness radically changed how I looked at the world and how I came to be attached to things. The principles in this book helped me overcome limiting ideas I’d always held about love and romantic relationships, to name just a few.

In early 2020 I had a terrible dating experience where I was both rejected and embarrassed. It was a classic example of what we’ve come to call in modern times ‘the friend zone’.

Whilst I was living an otherwise exciting and dynamic life, I still didn’t have a good enough grapple on how to date and form romantic relationships. So, I made a point of sharing my exact experience with a circle of my closest friends. It sparked Scott in particular to talk to me much more about how he viewed relationships.

Combined with enforced lockdown due to COVID-19, what began was a few weeks of nightly phone calls, often hours long, talking more about all things work, business and life. Amongst those hours of conversation was deep talk about relationships and how Scott viewed dating. I could not believe how different his thoughts and approach were from my own!

We talked about things to a depth I’ve never done with any of my other friends. And if we hadn’t, I’m confident I’d still hold a lot of the bad habits and limiting thoughts I used to have about dating, relationships and women right now.

As this used to cause me so much grief, anxiety and frustration, I can’t tell you what a relief this has been to have lifted (for now, lol).

To rewind a bit, Scott landed a pretty cool gig at his university (UTS) around the same time our work in Nepal was picking up. He got to run a summer studio subject — based around our work in Nepal! This was so exciting for both of us, because we were blown away by how much we learnt by getting involved in a real project compared to what is learnt in textbooks.

The students in Scott’s short subject had a great experience, and we knew that learning had to be more project-based and attached to real world problems.

When COVID-19 flared up in 2020, it seriously slowed down my real estate business. Because of that dial back, I decided it was finally time, two years after that UTS subject, to commit more fully to influencing some of the changes in education that Scott and I had talked so much about.

These conversations started happening with those back-and-forth phone calls each evening, intertwined with the same phone calls where we talked about dating and things about life in general.

Now one of my biggest weaknesses is that I can be an over-thinker, and can get lost when it comes time to filling in detail. Rather than doing everything on my own, it was invaluable to have Scott there for those conversations. Even though he was fully tied up and busy with his own company, Espresso, his soundboard, ideas, and ability to draw out my own ideas proved invaluable.

Last year we began a book project together where we invited six other authors to write with us what is now to be known as 18 & Lost? So Were We. The whole experience of writing the book was designed to be a self-directed learning project — showing ‘everyday people’ like us that they could be authors and writers, even if they’d never thought of writing before.

The right companions on your journey, like Scott, have a deep-reaching impact on your life and your learning. What are some of the other ways this friendship has shaped who and what I am today?

People I Wouldn’t Have Met Without Scott

Some of my dearest friends and favorite people right now include Josh, Conrad, John, Charbel and Robby. Oh, and of course I have to include my current girlfriend, who I only met because Scott encouraged her to follow my Instagram!

Opportunities I Wouldn’t Have Without Scott

Without Scott, I doubt I’d be doing what I’m doing now at The Constant Student and with the book 18 & Lost — not only that, I’ve been given investing opportunities and bit-roles in startups that compound my learning even further because of introductions he facilitated!

As I say at the end of every podcast episode, the best way to open a Thousand Doors for you is to concentrate on opening Doors for others.

Some of the Books I wouldn’t have read without Scott

Things I Wouldn’t Have Learnt Without Scott

Guessing Where I’d be now Without Scott’s Influence in my Life.

I have an abundance of friends — I’m blessed in that regard. But volume of friends is not so much worthwhile if you don’t have the right friends who support you, challenge you and compound your learning journey.

So if I were to take a stab at describing life without Scott’s impact right now, then I would say right now I’d still be working mainly in property. I’m sure I’d still be writing, but I don’t think I’d have 80% of the ideas I have (even if Scott is not clearly attributable to them) — I’d have different ideas sure, but not these ones.

I’d have much less confidence, much more regret (from not realising as much of my potential), and I’d be still having a lot of anxiety and a lack of self-acceptance stemming from struggles with romantic relationships.

If for nothing else, no matter what I was doing, the journey would be nowhere near as much fun. Perhaps you could survive and thrive on your own just fine — but why the hell would you want to anyway?

Thinking Bigger than me… The Thousand Doors Effect.

If the Constant Student, 18 & Lost, my podcast, books, or any of the other projects I get involved in help other people, then we need to think about the broader implications of people finding their Scott’s.

We can understand this with my metaphor of the Thousand Doors. On the surface, it looks like we are talking about two friends helping each other on their careers and life journeys. But the impact is way bigger than that.

If the Constant Student creates the Room where 10 people form partnerships like this, it will dramatically impact their lives and open new Doors. And if those 10 then set up Rooms that help another 10 people each, this effect keeps on compounding, from 100, to 10,000 and beyond.

Perhaps amongst this wave of partnerships and tribes we find the Buffett-Munger equivalent for industry after industry, social challenge after social challenge — perhaps they’ll cure diseases, eradicate poverty, bring more enlightenment, tackle our mental health and suicide epidemics and build a Gillage.

For all this to happen, the right people need to get together in the first Room. So you don’t just want to find your own Scott. You want a stack of other people to find their Scott’s so that they will build the world you want your children to grow up in.

What are you Trying to do Here Joe? (Louis & Kyle).

I met these two incredible young guys called Louis and Kyle recently, who run a fantastic podcast which streamlines their learning journey — https://www.louisandkyle.com/

When I was getting their feedback and advice on the Constant Student, I was attempting to explain what it was that we were trying to do. In the end, the explanation became simple.

“Completely agree” Kyle said, “It is everything” (paraphrased).

If you don’t have the like-minded friends that challenge and support you, you are likely on the wrong path already. Your first priority in learning is not a degree, a piece of paper, or even reading books. It’s the like-minded tribe.

My dream is that the Constant Student Community is a place where that can happen.

Don’t take it from me. Take it from two of the most renowned, 62 years strong and counting.