Explaining The U-Curve of Certainty

So after reflecting on a lot of Nassim Taleb ideas, and a fair bit of my own philosophy, I’ve arrived at this general U-Curve of Certainty Theory.

The hope is that it helps us find the truth when speaking about complex systems (What’s a complex system? See my definition here) and avoid ‘The Weatherman Phenomenon — how smart people become dumber, while looking smarter.’

The idea in a nutshell is this — I can be very certain about things that are Micro (smaller in scope), specific/individualised and imminent, and also about things which are very Macro, general and long-term, but not much inbetween.

I don’t know weather to believe the Weatherman or not.

It was New Year’s Eve on one year or another, I can’t remember which, when the forecast the day before gave a ‘0% chance of rain.’ Yes, that’s right. Zero. Zilch. Nothing. Nada.

The next day, it rained.

As we discussed in the Weatherman Phenomenon, there are a lot of pseudo-experts keeping their places in society, hiding in broken feedback loops. These broken feedback loops exist because they are talking of complex systems while thinking they understand some part of them, when, no matter how ‘smart’ they are, a granular understanding of such things is not possible.

The point of the U-Curve is to shepherd us away from thinking we grasp the complex. It’s to outline this strange perimeter of what, if anything, we can predict and say with confidence.

Let’s take a sunny day in Sydney, with no rain expected, not even by a pseudo-weather expert. 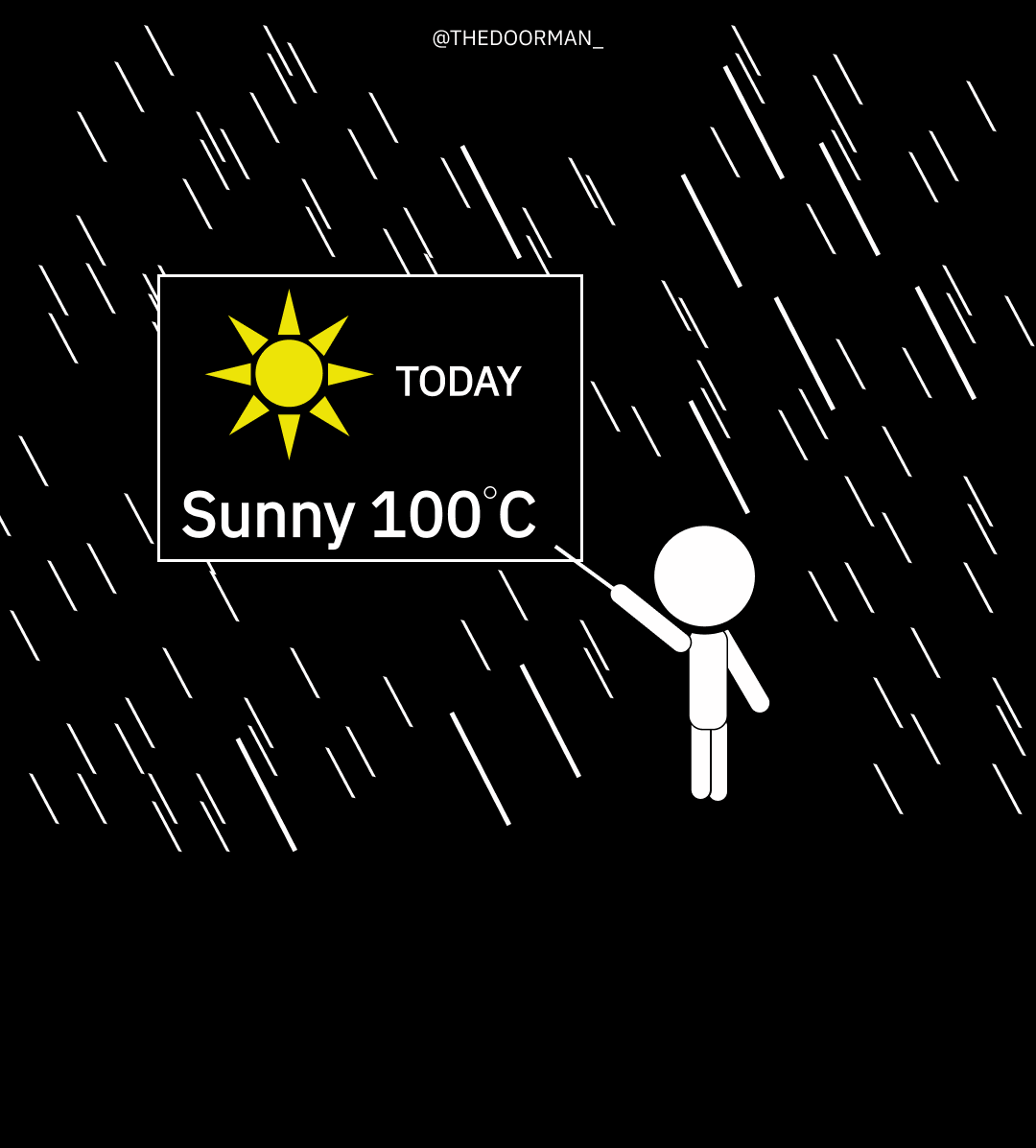 But what if we talk about something less specific?

Hence the U-Curve shape in the graph. If I want to make accurate predictions about the long-term, I have to be more Macro, more generic, and I can’t pin down a specific time — we don’t normally try to do this with weather, unless we’re holidaying or getting married, but we do in other complex domains, like career planning, looking at markets and business (forecasting, setting b.s. targets etc.).

Can we give career advice… at all?

I think it’s hard to create best-for-all or even best-for-many career advice. Scratch that, I think it’s impossible. You don’t need to take my word for this, you should test it yourself — it’s a simple thought experiment.

Is there anything you can say that is absolutely true for a group of people’s careers, except for the most generic of advice like ‘realise a sense of purpose,’ and even then, it’s still easy to misinterpret.

The concept of careers as ends-in-and-of-themselves has always seemed like a total bubble to me (that means it’s an abstraction away from Reality, i.e. totally alafac, a fuguzi, b.s.) — and the lack of fundamentals might just validate this idea. I think careers should just ensue from people’s interests and life experiments.

The more specific and specialised the advice, the better. Yet, we have celebrated a lot of people in society who give career advice en masse, who spend all this time trying to advise how we build better careers, spend all this time scratching their heads, only to have developed a theory that is inevitably full of holes.

When we state what is not true, and present it as true, we create bubbles in Reality. To understand a bubble think of films like The Matrix or The Truman Show — when trying to justify a logic that doesn’t fit with the Reality of the world, we’re forced to uphold and con others into a story that’s not true.

Because the truth is not in the experience itself, we try to validate it via social proof (other people following along with the con we’ve sold ourselves on, or feeding our ego).

It’s been done in schools, in the personal development world, in religions, spiritual groups, in self-help literature, in science, in Hollywood, in the university system, in the corporate world, in startups… I can’t list all the places.

The one thing they all have in common is that they must, to create their Bubble, make Reality more confusing. Just remember, all Bubbles eventually pop — just like the bubbles you blew as a child — a bubble cannot sustain itself forever.

The reasons I find the U-Curve theory significant or useful.

Below are the main reasons:

Rather than endless explanation, let’s just have more examples.

After all, this theory could be total baloney on my part.

For example, these are outcomes that I’m almost certain about:

Funnily enough, I’m almost certain about these things happening too, but they’re on the other end of the spectrum:

These, on the other hand, are low confidence:

Examples of using the U-Curve Theory

I’m almost certain I’ll be writing my book about the workplace tomorrow. I don’t know what I’ll be working on in 12 months though, but I’m pretty confident I’ll be doing writing of some kind.

12 months ago, this book on the workplace was not even one of the ten possibilities! Back then, I was committed to non-fiction books, and I still hadn’t met Paul Rowse, my co-author.

It might be stupid of me to over-plan my future working projects. Do I need to? What does this gain? Perhaps I’ll plan from the Goldilocks Zone.

I avoid pushing too hard for specific, long-term goals — I let things ensue.

Say the next thing I want to focus on after the workplace book is done, is to write about the education system. I might indeed be working on this book in 12 months time, I just can’t be certain.

Bubble logic would say, ‘but education is a critically serious problem, so this has to happen,’ — I believed that 12 months ago, but now hold a view that is a transcendence of the ‘education problem,’ rather than a denial of shortcomings in the education system.

At the moment I’m reading Matthew Perry’s memoir, Friends, Lovers, and the Big Terrible Thing. Matthew Perry is famous for playing Chandler in the hit TV series Friends. He was so desperate for fame that, on the eve of auditioning for Friends, he prayed saying ‘God, you can do whatever you want to me. Just please make me famous.’

He became famous, but has had a multi-decade struggle with alcohol, drugs, smoking, and feelings of inadequacy. Fame was a relief strategy, but it could never be a solution.

This is an isolated example of my suspicion — that sometimes we get the thing we wanted, the thing that violates the U-Curve, but there is a terrible trade-off somewhere else. Nature teaches us the lesson, that such things are just one part of Reality, that they are fleeting and never panaceas.

I’m pretty committed to this writing thing. I’m almost certain I’ll be writing many more books, but I can’t say how many, in what genre, what type, and in what order.

I’m pretty confident I’ll be able to make a living purely off writing at some point, as long as I keep it up and keep working at it. But there’s no need to push writing for the sake of it, or get too desperate at improving as a writer — that might block something better coming along. 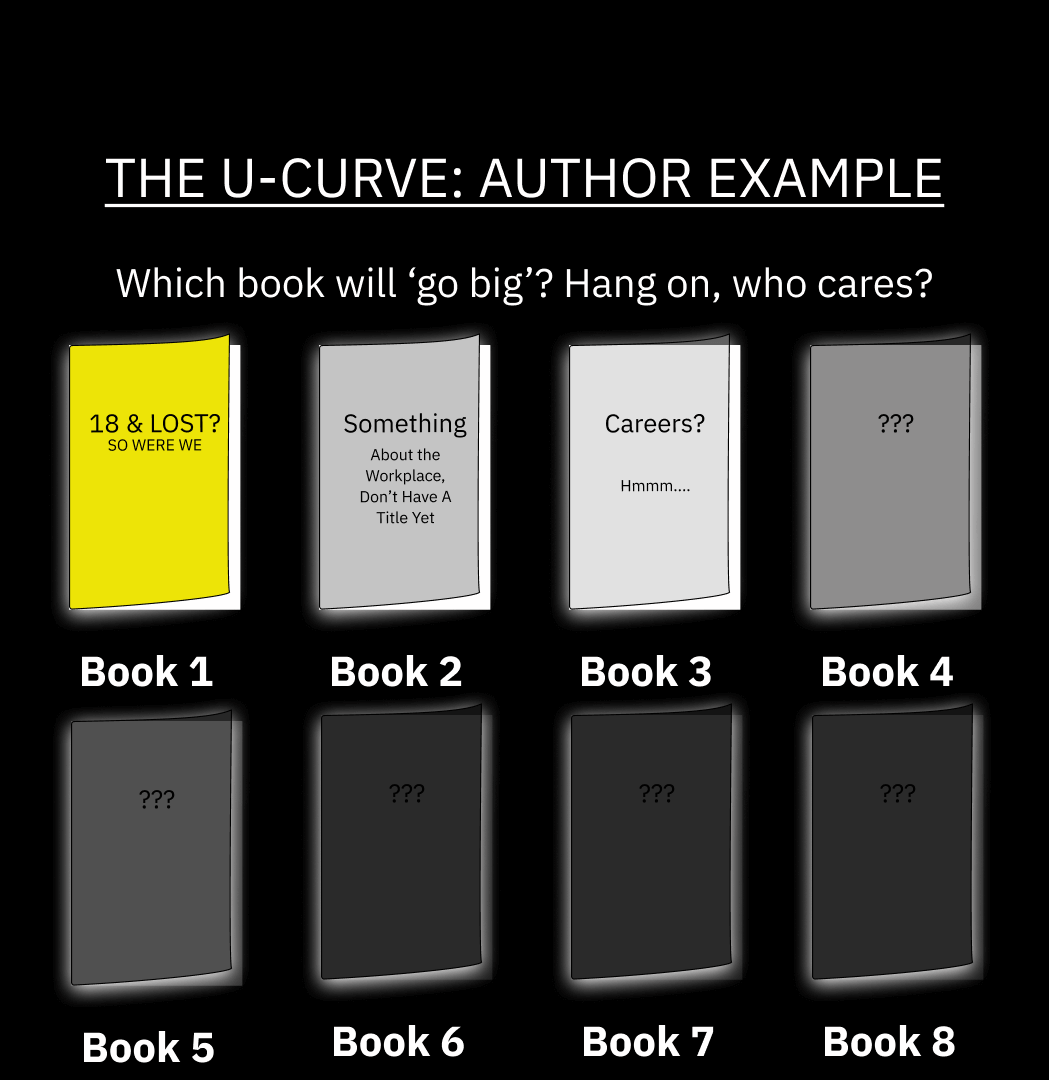 I couldn’t say which, of any of the proposed books I might do, might catalyse a ‘breakthrough moment,’ but I feel confident in that, if I keep doing the writing in a non-attached way, that is, staying in the Goldilocks Zone, one eventually will. 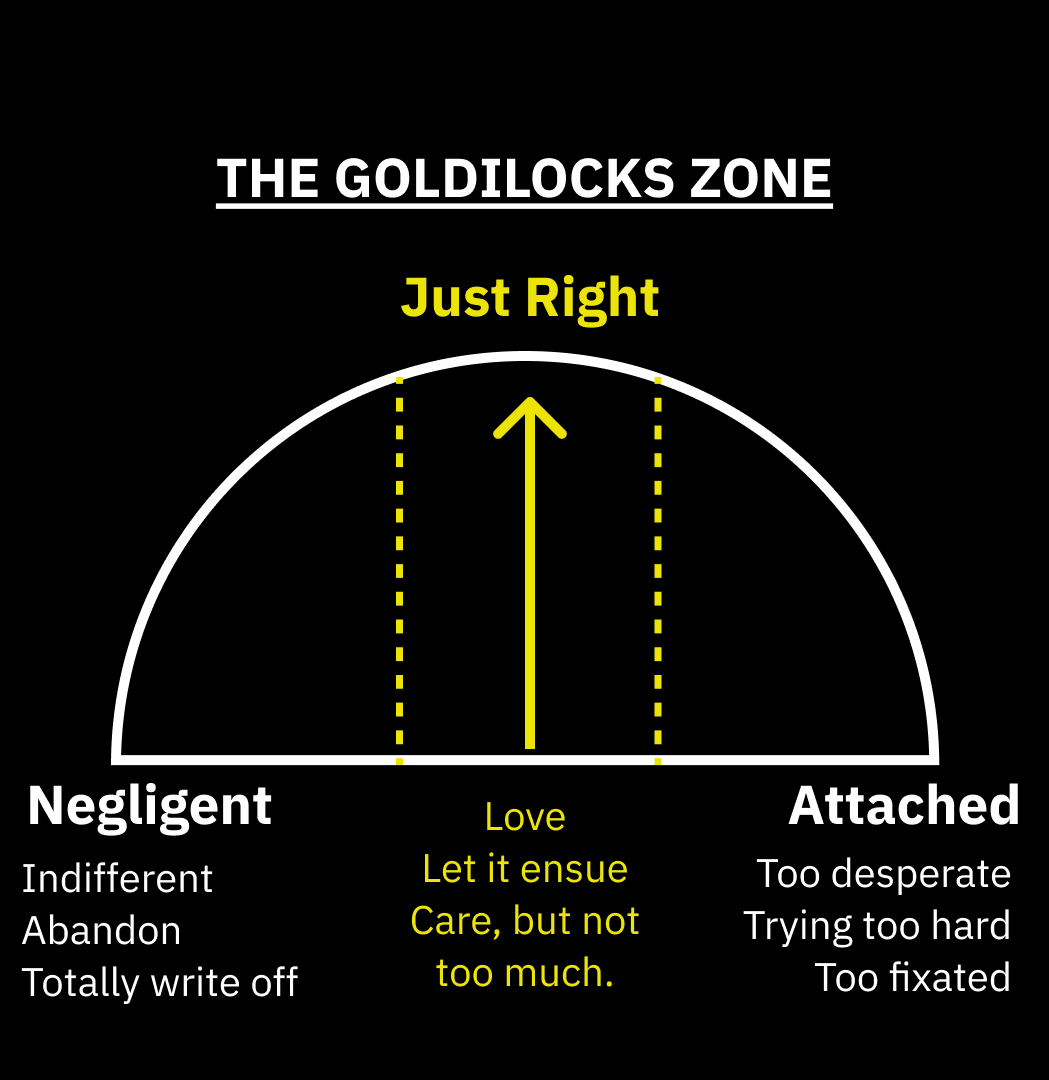 You know what, isn’t that exciting? That’s all I need to know really. Knowing that, I can proceed with confidence and faith.

I can be sure that if I keep participating in society, going on dates and engaging in my interests, I will meet a fine young lady who I might form a long-term committed relationship with.

I can’t be sure about when it will happen. I also can’t say exactly what she’ll look like, how tall she will be, what colour hair she’ll have, or even, if I dare say it, if she has Lebanese heritage — even though failing to tick this box would cause me problems with grandma.

But I am almost certain that some sort of suitable women-like thing out there who can tolerate me. (The author notes, his old dating partners would probably disagree.)

There’s also the possibility that a relationship won’t make sense for me ever again. If that’s best for me, why be closed to it? This surrender gives me a deep sense of peace and calm. You mean I don’t have to be anxious, or desperately chasing people?

Is it safe to say that being anxious about when this will all go down increases the chances of choosing a bad partner, or developing a relationship on a flawed foundation?

In fact, the times I’ve had most Romantic success seem to have come at times when I’ve most surrendered.

As the VC’s would tell you, they don’t necessarily know which of twenty startups will end up ‘big’ (which is code for, making fat stacks of cash or equity). But they do find that one in every twenty ends up ‘big’.

Therefore, even someone who is a bit of a monkey can be an investor and make a mozza, without knowing a whole lot about anything except real basic risk-reward.

When do we go wrong then?

You can invest in the generic, Macro and long-term, as long as it’s based on fundamentals.

When do we go wrong then?

When we’re making decisions from a basis of fear. When we define ourselves by the extrinsic, when we have an inner void — which is so often created by culture and childhood.

It’s as if we are all, in this life, given a block of land to develop, to do with as we like — yes you need some small approvals from council but there’s plenty of freedom.

Other pieces in this series included understanding complex systems and the Weatherman Phenomenon.

For more updates or understanding of what’s next in my little ‘bubble’ head to everything Joe or sign up for the very infrequent newsletter I run below: