Are you a Renaissance Person?

But we should not expect to find one single and simple answer to that question. I can’t think of anything worse.

Why should you be only one thing?

The pressure you might feel to be just ‘one thing’ in your life and in your society is based on a very limited style of ‘Box Thinking’. We fell into, some time ago, a way of thinking about social roles that is not set in stone – but it feels like it is.

Instead of living authentically, most of us are trying to cram ourselves into boxes where we don’t fit.

This way of thinking has cost people their mental health, and their lives. It’s left people thinking they’re weird, that they don’t belong, and that something is wrong with them… just because they don’t fit in a box that they think everyone else fits in.

But why do we have to be just ‘one thing’?

When you go to a party people ask you what you do, not who you are

One of the best things we can have is a complicated answer to the question “what do you do?”. It’s great for a personal lifestyle perspective, but it does not help small talk one bit.

I have a complicated answer (thankfully) but when people ask me what I do, I often cower and just say ‘real estate’ to avoid opening a rabbit hole. After all, there are only so many vacant expressions and crunched, confused eyebrows a man can take.

Asking what we want to do? or what we do? are the wrong questions. The right questions to ask are who are we? And who do we want to be? From that we can unpack what do I want to do to be that person?

The great irony of all this is that being more than one thing is not a novel idea, not something to catch as it falls out of the sky. It is something that was buried that needs to be dug up.

The Renaissance was a cultural movement that spanned from somewhere between the 14th and 17th centuries. It emerged from the Middle Ages and raised the importance, ‘rebirthed’ the classics of philosophy and literature, and championed individual experience – a cycle I believe is circling back round in the world right now.

In this period it was much more common for people to be multifaceted. These days we call such people ‘polymaths’ or ‘multipotentialites’. In the Renaissance, this sort of person was called a “Renaissance Person”, and referred to people like Leonardo Da Vinci, Michelangelo, Copernicus, Galileo and Raphael.

“The idea of a Renaissance person is one who is learned in a range of disciplines including the arts and sciences. The quintessential Renaissance figure is Leonardo da Vinci, a man gifted in painting, sculpture, mathematics and science. When Michelangelo was painting the Sistine Chapel he had in his room drafts of scientific theorems and of new technological innovations.”

… Sir Ken Robinson, Out of Our Minds: Learning to be Creative

How far society has progressed. These days you’re either an artist or a mathematician or a scientist or a creative… we rarely give people permission to veer outside of one box.

What are the advantages of being a Renaissance person?

Surely this is a mark of progress however? Surely specialising in one thing makes more sense?

Specialisation has its advantages, but narrow mindedness does not.

This is an idea championed by people like Ken Robinson and even the famous investor, Charles T. Munger. These masters of wisdom emphasise the importance of understanding a wide range of disciplines and patterns of thinking.

Studying only one of science, of art, of history, of psychology… rather than examining the disciplines as a whole gives us a narrow perspective.

Munger on the disciplines

“Poetry professors, by and large, are so unwise in a worldly sense. They don’t have enough models in their heads. So you’ve got to have models across a wide array of disciplines.”

“It’s kind of fun to sit there and outthink people who are way smarter than you are because you’ve trained yourself to be more objective and multidisciplinary”.

One of the best pieces of generic advice I’ve ever seen is in this video by Tim Ferriss on being a ‘Specialised Generalist’ – someone who combines two things that rarely go together, that are valuable together.

For example imagine being one of how many millions of lawyers in the world, all competing for the same roles, largely indistinguishable from one another.

Now imagine you also have a photographic memory

This would be a distinct advantage, being able to call on legal precedents and information much faster and more quickly than your competition.

Perhaps you’re a parent who is also a developmental psychologist by profession. You have a huge advantage in raising children, but also get a powerful perspective for your professional work given you have the real and practical experience of parenting and child-rearing.

The idea of concentric circles

Even if you’re a polymath or multipotentialite who currently feels split between too many different things, you might be surprised by how much clarity and decluttering you can do with the concentric circles exercise.

All this involves is figuring out the Venn Diagram, where the crazy circles all overlap in one thin little area.

This is a major asset to helping you understand what it is that only you can do, that no one else can compete with. That puts you in a category of one.

Here’s a simple example for me. I have plenty of circles in my life but for simplicity, some of my working circles were best summarised by my nonprofit experience, my experience in real estate and my love of writing. Writing as a passion has had many forms over the years, where I once wanted to be a filmmaker for example… so we could class this as ‘storytelling’. 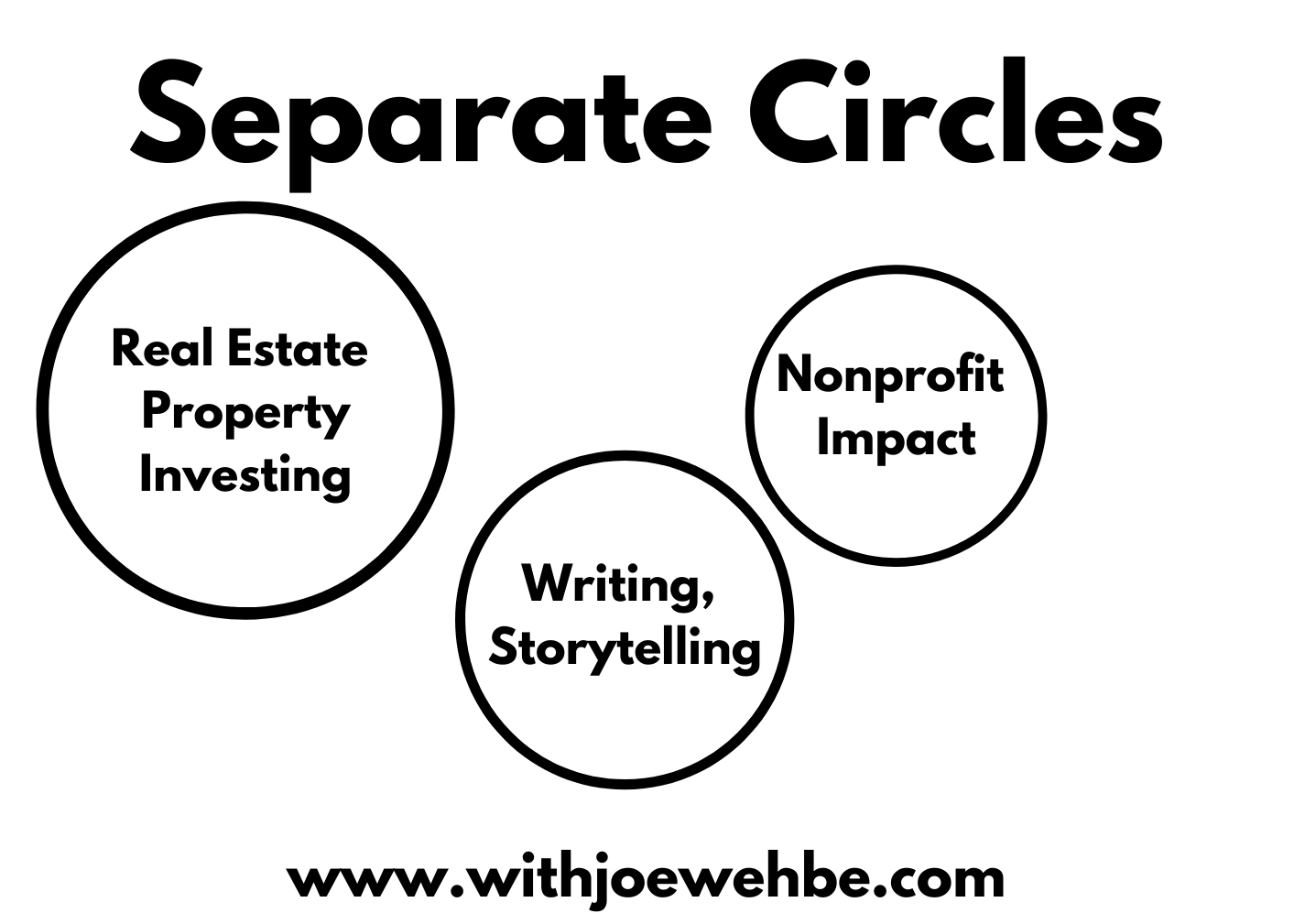 They look like crazy, separate circles, with no possible link in between.

Ah-ha! But that’s where creativity comes in. After a number of years I started to realise that I cared deeply about impact and had a good problem-solving toolkit (nonprofit influence), I had an understanding of the investing framework (through a property angle) and I had also been cultivating the skill of writing and communicating ideas clearly.

Looking back, this subconscious convergence of circles really influenced ideas like The Thousand Doors and Time ROI – which, more than anything, have been useful for me personally. Though I also think (and hope) they are important discoveries for others as well! 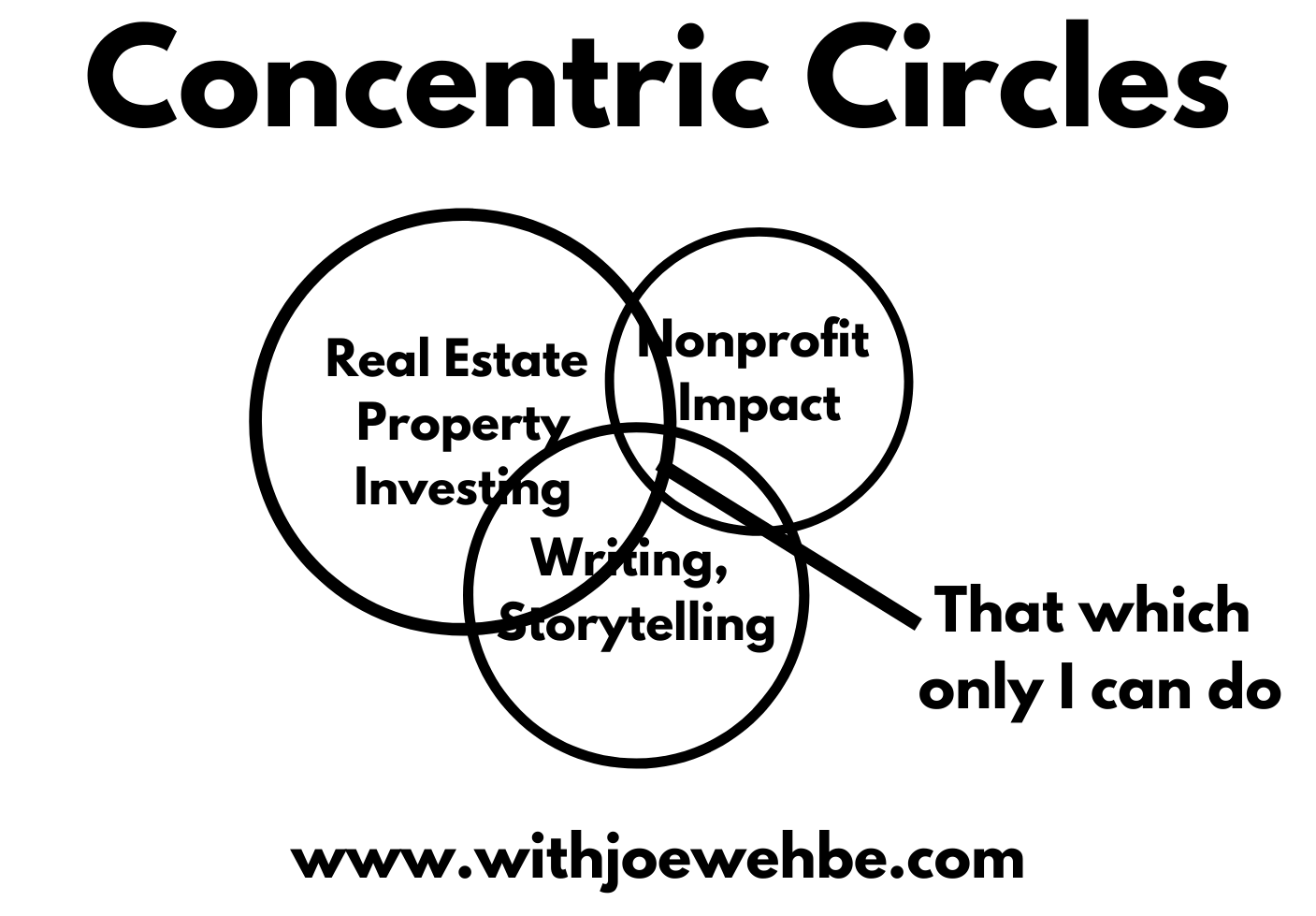 Your concentric circles, whether they overlap neatly, obviously, or subconsciously, provide you something that only you can do. If that’s not a good incentive to be a multidisciplinary ‘Renaissance Person’, then I don’t know what is!

Franklin influenced Munger greatly with his fantastic horizontal spread; he is credited as an inventor, writer, printer, scientist, politician, diplomat and much more, as well as… a Founding Father of the United States.

There might be value on doubling down on one thing, sure. But know this – others have managed to keep multiple strings to their bows.

That means it is possible for you too.

What Munger, Franklin and the Renaissance People have likely done is synthesise incredibly well lessons from across disciplines, using the concentric circle model.

I think an amazing example is the Lean Startup movement, which takes the concept of the scientific method and applies them to business – with an emphasis on having a hypothesis, testing, and removing assumptions.

The concept of ROI has also started to pop-up in the humanitarian and social impact world! So the more you open up your eyes to being and comprehending multiple things…

You start to see concentric circles everywhere, instead of narrow boxes.

How did these narrow boxes form?

When we use Without-the-Box Thinking to unpack trends and assumptions, our boxes of thinking, we ask ‘who made the box and why?’ as well as ‘how did the box come to be there?’. 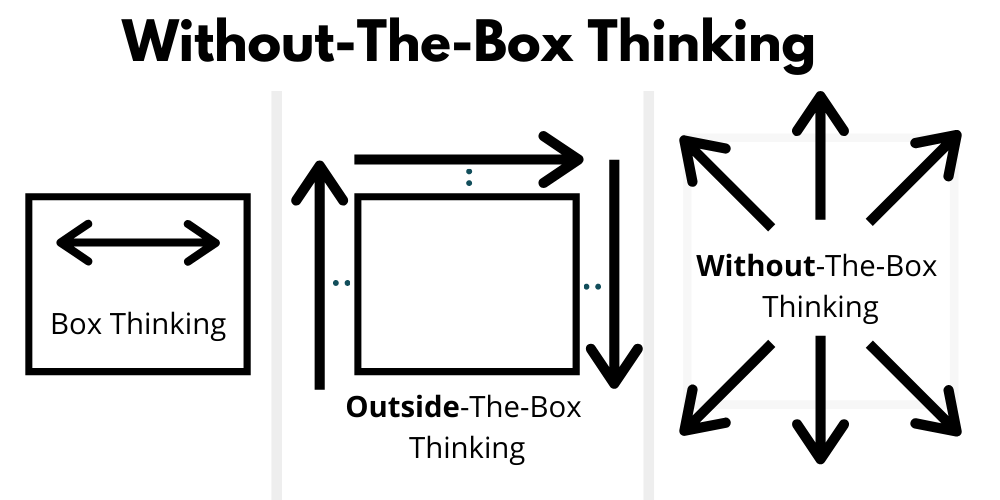 The Three Levels of Thinking

We veered away from this style of being under the Enlightenment, when scientific and logical disciplines began to dominate. Over time, this has led to our current hierarchy of career pathways and school subjects.

Math and science get more highly weighted than the arts, and this is discussed at length, once again, in Robinson’s book.

In other words, there is no reason why we can’t be Renaissance people today.

Embrace your diversity, find your concentric circles too.

There is no reason you have to do or be one thing. You choose your Minimum Viable Lifestyle, you make sure you survive, then after that, it’s up to you.

Maybe you like doing one role, or being one type of person… well, that’s fine!

But if you like doing it all, then that is fine too. You don’t need anyone’s permission. You just need to give yourself permission.

In my opinion, the greatest journeys come from taking a holistic, multi-disciplinary perspective, that give you more mental models to think through.

What are your concentric circles going to be?

Who do you think of when you read this? Would this piece ‘open a door’ for someone you know? If so, please share it with them.

Remember, the best way to open a thousand doors for you is to open doors for others.