And it was Gilly who invited me and some friends to speak on a Zoom Event last year. We were sharing our personal religious and spiritual journeys for a group called SIP, which stands for ‘Spirituality in the Pub.’

All these SIP members listening in were middle-aged and elderly — most of them had some sort of Christian background, yet the conversations they have are totally open and very often multi-faith. They’re not conservative, they’re real, and this struck me from the outset.

So the three of us told our stories, openly, holding nothing back. We’d followed similar paths — grew up in the Church, passed through adolescence, and then suspected that organised religion was not the be-all-and-end-all. We felt the Church didn’t have a monopoly on the answers or pathways to God, and that it was just one of many tools trying to point to Reality.

To me, the Church was compromised the moment it became institutional. Institutions cannot avoid bureaucracy, and bureaucracy suffocates the life out of everything it touches.

Bureaucracy is like a heavy backpack — no matter how you redecorate it, no matter what you add or remove from it, the heaviness of the backpack itself makes your hike long and painful.

After sharing my story, these kind and gracious people asked me:

Joe, how would you fix the Church for young people? How would we re-engage people like you?’

I looked around at the many elderly and middle-aged faces. These people had adapted to Zoom and shown up to this conversation with open hearts and open minds. Despite their vast life’s experience, they were here, humble and genuine enough to listen to and learn from the experiences of young people.

We typically forgive ‘the elderly’ for being stuck in their ways and ‘too old to change,’ yet here were these beautiful folk — not in any way defensive or judgmental, and without the slightest hint of any dogma, agenda, authority or sense of self-importance.

There were no clergy, no rituals, no symbols, no uniforms, nothing! Just people talking about the real things in life. Well this, coupled with their question, really made me laugh. Laugh aloud I did, and I said:

Such is the world my friends. If we just put the backpack down, and carried only what we could fit in our hands, all the debate and drama would collapse on itself. But we are so poor at seeing or ‘settling’ for simple solutions. Why?

Why do we develop bogus boxes to tick?

A close friend was picking my brain for property advice, over lunch and coffee in Sydney’s North Shore. I’d had the same conversation several times before… my thinking then and now is that property, like religion, is not the be-all-and-end-all.

There are those who will find this even more shocking.

‘I’ll be dead one day, and I’ll either have lived where I wanted to live or not, whether I rented or owned the place.’ This was a very controversial view for someone who’d not only worked in property, but whose family’s material privilege came from property development.

After walking through this matter in its entirety, and removing every possible reason to get a property at all costs, my friend, very honestly, said:

‘Well… I guess it just feels like an achievement though.’

Simple solutions are always within reach, but it seems that most bogus boxes we need to tick come from ego, social conditioning, and perhaps greed.

In another area of life, I must say, it’s funny how career anxiety melts away once you let go of status-seeking behaviour. Needing to make fat stacks of cash or become historically or locally renowned in whatever one tries really adds a lot of mental burden, and makes people really ineffective.

Reality is simple, and so…

If you deconstruct something and it stays complex, you’ve still got further to go.

This blog piece is the final installment in a series on the U-Curve of Certainty Theory — if you remember, when something is complex, we can be certain about the very micro, short-term, specific and circumstantial, or the deep fundamentals, first principles, macro and long-term — and almost nothing in between.

Fancy way of saying, things are simple at both ends. This is why I think life is simple for people who might be considered non-ambitious and ‘everyday,’ as well as those sages who ‘cross the U.’

It reminds me of a powerful Anthony DeMello quote:

“There are three stages in one’s spiritual development,” said the Master. “The carnal, the spiritual and the divine.”

“What is the carnal stage?” asked the eager disciples. “That’s the stage when trees are seen as trees and mountains as mountains.”

“And the spiritual?” “That’s when one looks more deeply into things—then trees are no longer trees and mountains no longer mountains.”

“And the divine?” “Ah, that’s Enlightenment,” said the Master with a chuckle, “when trees become trees again and mountains, mountains.” — Anthony DeMello.

Taking something complex like… marketing, politics, the education system, health, sales, relationships, finding the truth, ‘fixing the church’ and so forth… we cannot change the reality that these things are complex — that’s mistake of those I nickname ‘the Weathermen.’ 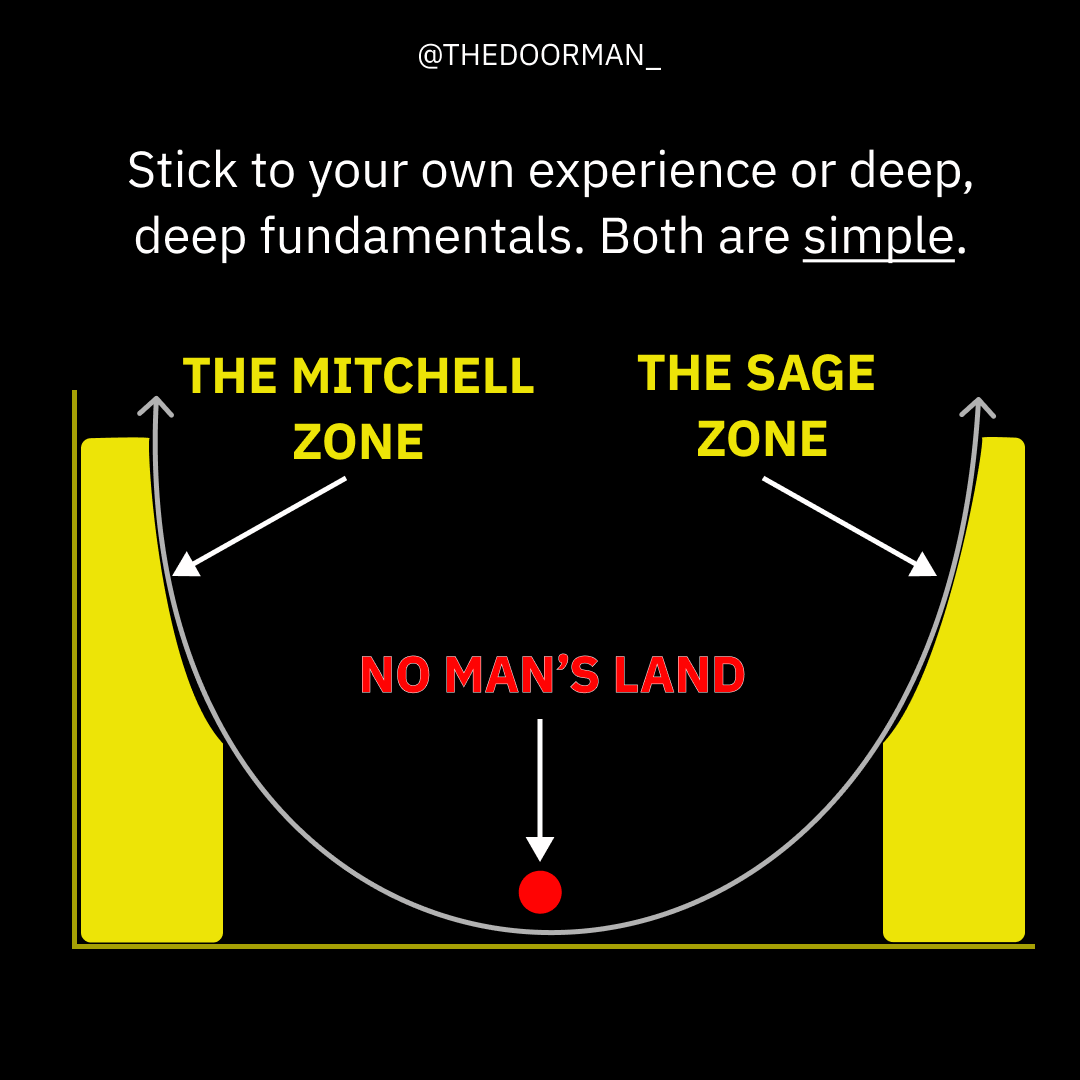 Keeping life simple (The Mitchell Zone), or the Sage Zone, dealing with only fundamentals… both are simple, unlike everything inbetween.

But the U-Curve Theory suggest that there is always a simple solution despite complexity. There is simplicity to be found at both extremes — that is, the micro and specific (the here and now) or with the deepest fundamentals.

So, if you’re trying to work something out that’s complex, the point is, don’t try to know some dynamic complex thing, but perhaps look for the simplicity despite how complex the thing is. It always exists, and it can be so painfully simple that it really hurts your pride.

Simple solutions have one thing in common — as was the case for my dear friend, who went on to buy his property two years later — they don’t satisfy the ego. It’s something I’ve been guilty of many times.

And you know what, who says it’s not okay to wade through the complex a bit, if that’s what it takes to find the simple solution? So long, I suppose, as we remember that…

Oscar looking for the soap in the laundry.

My brother Oscar messaged me the other day — he wanted to put a load of washing on, and so he was searching the laundry in our apartment for the soap. I video-called him and saw he’d searched every nook and cranny, for the cupboard doors were all open and the jars and liquids had all been re-arranged during his hunt.

I laughed to myself, knowing that the soap he sought was in the one place he’d never think to look.

‘It comes already inserted within the machine,’ I explained to him. In other words, it was not in any of the cupboards, but already inside the machine. He was looking outside, when he needed to look inside.

It reminded me of the many searches we undergo in life — for the perfect sales technique, for the perfect partner, for meaning, for solutions to our pain — and the answer often sits in the one place we’d never think to look…

So simple, yet so hard to come to that conclusion.

You will have to walk with those questions yourself. If I told you what I currently think, you’d call me mad.

For more, check out ‘the Doorman.’

Otherwise, for any concise updates or important shares, sign up to the Doorman below:

Explaining The U-Curve of Certainty